Gödel, Escher, Bach by Douglas Hofstadter (at Amazon.com).
This is not merely a magnificent exposition of the power of self-representation in mathematics and logic and philosophy and biology, but it is a fabulously constructed book. The word play, the demonstrations, the analogies, the stories, the puzzles, the explanations, all facets of the book work together as a masterpiece of art and engineering.
Gödel, Escher, Bach is about "strange loops"—swirly, twisty, meaningful patterns that arise in particular types of systems of symbols. Hofstadter demonstrates strange loops in logic, brain and mind, mathematics, philosophy, computers, and DNA. Strange loops allow a system to say things about itself, and hence a mind can think about itself and a mathematical system can prove itself to be incomplete. More than that, a strange loop has a power on the system; it affects and constrains the system. Hofstadter thoroughly explores and brings out the magnificence of this concept.
Robert Forward.
Robert Forward is a physicist who writes hard science fiction. I like Dragon's Egg (at or Amazon.com), and I also liked Rocheworld (at Amazon.com). More than any other current writer, Forward explores environments that are unusual yet just might be possible given our current scientific knowledge. Dragon's Egg is a particularly good example, detailing life evolving on a neutron star. It is also criticized by many people for lack of characterization, which is fair; the book is about the possibilities and is a nice story, but it is not about characters. Forward's later work, such as Rocheworld, has somewhat more characterization.
Charles Sheffield.
Charles Sheffield is a physicist who writes hard science fiction. I like The McAndrew Chronicles (at Amazon.com), but it is out of print. Try to find a used copy at AbeBooks.com.
Death by Chocolate by Marcel Desaulniers (at Amazon.com). 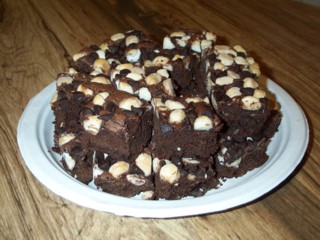 Killer dessert recipes with straightforward instructions. This is the cure for fancy cookbooks with great pictures but recipes you never get around to making. I have made over a dozen recipes from Death by Chocolate, almost always with devastating results. Take a look at these chocolate-chip macadamia brownies (larger image, 190 KiB). They have an incredible texture and taste, and they radiate a strong chocolate aroma. You can also make these without macadamias. Refrigerate the brownies overnight before cutting, or they will fall apart. 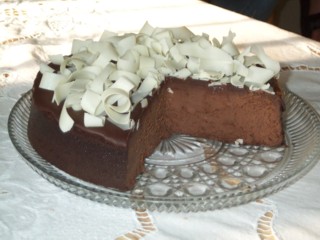 The brownie recipe does not take long to make, but some of the recipes in the book are long. However, they are straightforward, and they work. This book raised my baking skills several notches. When I bring a dessert from Death by Chocolate to a party, it is not unusual for folks to think it was purchased from a professional baker, like this cheesecake (larger image, 130 KiB). You can also see the cake before slicing (125 KiB) or a single slice (110 KiB). It is a white chocolate cheesecake recipe in the book, but I use semisweet chocolate instead. There are several Death by Chocolate and other books by Marcel Desaulniers. In some past years, there has been a Death by Chocolate calendar with recipes.

Vegetarian Cooking for Everyone by Deborah Madison (at Amazon.com).
This is the cookbook I use most. It is filled with useful information for learning about new foods or adding skills to your repertoire. Vegetarian Cooking presents information on selecting, storing, handling, and/or preparing sauces, breads, pasta, specific vegetables, and other foods. Each section includes a variety of appropriate recipes. In addition to the 1400 recipes, the book also teaches basic cooking techniques and how to combine ingredients to build flavor. Deborah Madison is the founding chef of the excellent Greens restaurant in San Francisco.
The Design of Everyday Things by Donald Norman (at Amazon.com).
A terrific easy-to-read examination of how to design things so their uses are clear. Norman discusses everything from doors to computer programs, and how the design of an object ought to convey what it does, what state it is in now, what changes can be made and how, and so on. A simple example: stove burner controls should be in a rectangular layout like the burners so that it is immediately and visually obvious which knob controls which burner. Why do so many stoves lay the controls out in a straight line? Norman's clear exposition of simple principles leaves us bewildered at why so many objects are designed incorrectly. There is currently a desperate need for this knowledge among web page designers.
Consciousness Explained by Daniel C. Dennett (at Amazon.com).
Consensus is growing among philosphers, neuroscientists, psychologists, and others that consciousness is an illusion. Our conscious experience is an illusion fed to us by our brain, a story that appears to represent the world around us and our thoughts but that is a fabrication nonetheless. In particular, a decision to move an arm, for example, is not made by our consciousness but rather by another part of the brain, and that decision becomes part of the conscious experience only a fraction of a second later. Dennett presents and explores his model of consciousness in light of a wealth of information from neuroscience, psychology, and artificial intelligence. His discourse is sophisticated, savvy, and distinctly rational, not castles-in-the-sky philosophy.
Represent Yourself in Court by Paul Bergman and Sara J. Berman-Barrett (at Amazon.com).
This is a step-by-step guide to handling a civil trial, including the basics of procedure and rules of evidence.
Black's Law Dictionary (at Amazon.com).
Black's Law Dictionary is a great aid in understanding legal terms. I like the edition I have (at Amazon.com), but there is a newer edition (at Amazon.com).
Mathematically Speaking by C. C. Gaither, A. E. Cavazos-Gaither, and Andrew Slocombe (at Amazon.com).
This collection of quotes about mathematics, mathematicians, and mathematical things is the source of many of the quotes on my mathematical quotations page.
The Only Investment Guide You'll Ever Need by Andrew Tobias (at Amazon.com).
This is a good introduction to investing. Read it for the orientation you need to make your first purchases. But it is not the only guide you'll ever need; serious investors should come to understand how stock prices are determined, which means understanding how companies are valued, which means understanding corporate finance. For that, I recommend college textbooks on corporate finance. Avoid the pop investing books you find in bookstores; buy something that is used to teach business majors. One such textbook to read when you seriously want to understand corporate finance is Principles of Corporate Finance by Brealey and Myers (at Amazon.com).